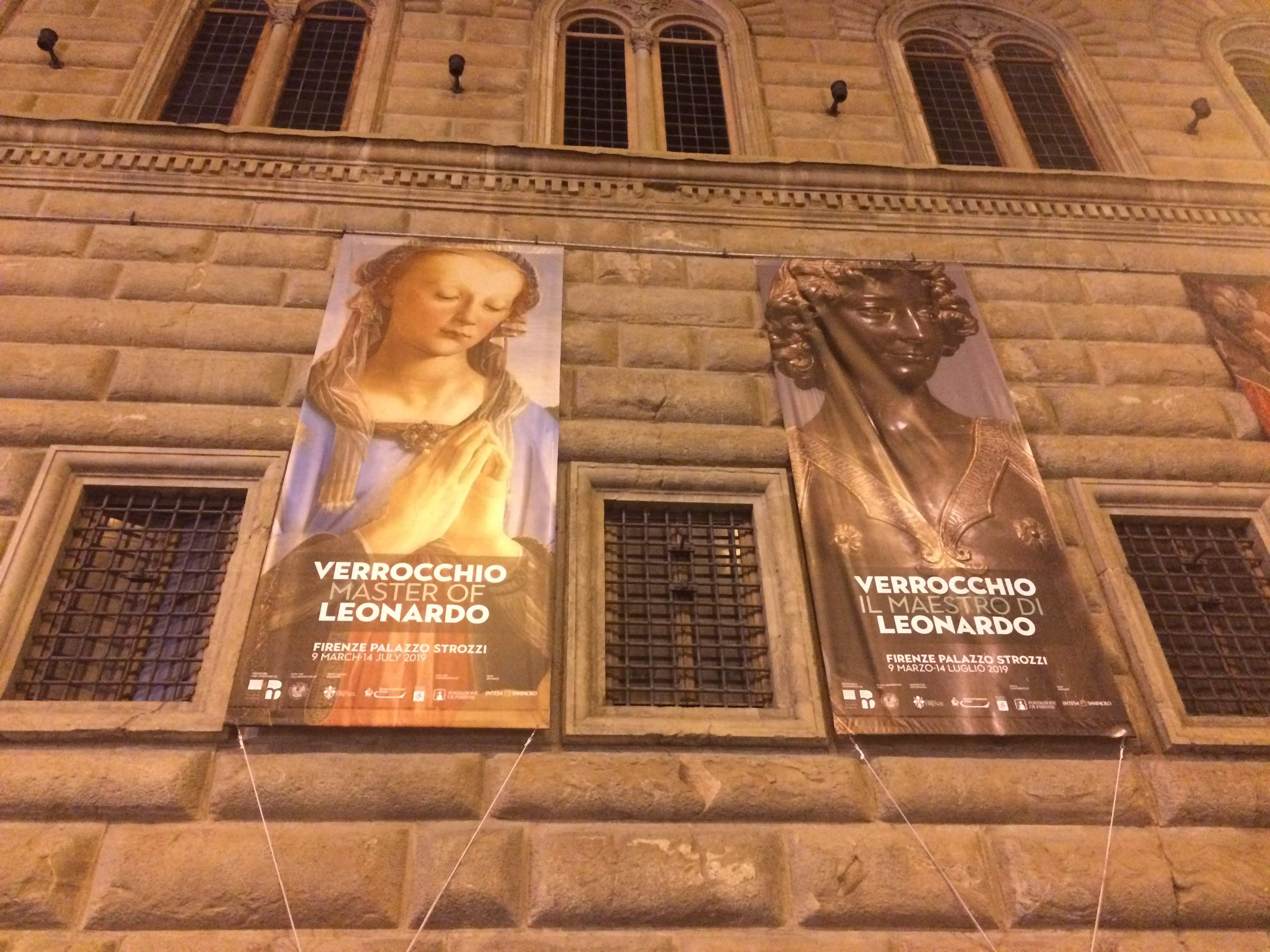 Palazzo Strozzi, one of the most beautiful renaissance palaces in Florence is housing a great exhibition dedicated to Andrea del Verrocchio, a fantastic artist who was not only Leonardo’s master, but also represented a trait-d’union between artists active at the beginning of the fifteenth century such as Donatello and Desiderio da Settignano to mention the most famous ones, and artists active in the second half of the fourteen hundreds such as Domenico Ghirlandaio, Perugino, Leonardo da Vinci, Francesco di Simone Ferrucci.

His workshop represented a fulcrum of new styles and attracted the greatest talents of the first renaissance. At his workshop he and his helpers studied the compositions of the Madonna and Child and the sumptuosity of costumes and draperies . His contemporaries admired the clarity of his paintings, the details of his jewels and the clear landscapes in the Flemish style.

Andrea's works did not concentrate on paintings as much as on the unforgettable bronze, terracotta and marble works he produced. Below I shall mention some of the works on display at Palazzo Strozzi:

- The Madonna and Child from the State Museum’s gallery in Berlin. Still under the influence of Filippo Lippi, here he displays a fine aristocratic elegance and skilled handling of details.

- The terracotta bust representing Giuliano de’ Medici, brother of Lorenzo il Magnifico, who was killed at age twenty-four in the renown Pazzi Conspiracy. This work was lent by the National Gallery in London.

- Sleeping Youth, terracotta with traces of polychromy. The young man could be the biblical figure Abel or Endymion, a mythological character condemned to perpetual slumber in return of eternal youth or simply an exercise in anatomy for his workshop.

- The bronze statue of David, normally on display in the permanent collection of the Bargello in Florence. In the same museum there is another very famous David by Donatello. His version represents a boy wearing clothes, differently from Donatello’s version and from the later version of David by Michelangelo

- The marble bust of a lady holding a bundle of flowers, from the Bargello collection in Florence. The detailed delicacy and perfection of her fingers and hands are among the finest execution in the renaissance.

-The bronze putto, on display in the interior of Palazzo Vecchio - which most people first see as a copy in the inner courtyard of this palace - stands in a perfect equilibrium on a fountain. The gracefulness, his sweet expression and the perfect balance of this putto holding a dolphin in his arms has made it one of his most famous works.

- Even though not part of this exhibit, but still in Florence in the old sacristy of church San Lorenzo, the refined tomb for the brothers Giovanni and Piero de’ Medici, among the first members of the Medici dynasty.

- Last but not least at this exhibit we find a precious work by Leonardo, unknown by the majority of public, yet so special and unusual for Leonardo: a terracotta small Madonna with the Laughing Child, usually on display at the Victoria and Albert Museum in London. The sweet and tender smile of the Madonna and the laughing child conquer us! Certainly Leonardo must have learned to model clay extremely well at Andrea del Verrocchio’s workshop. 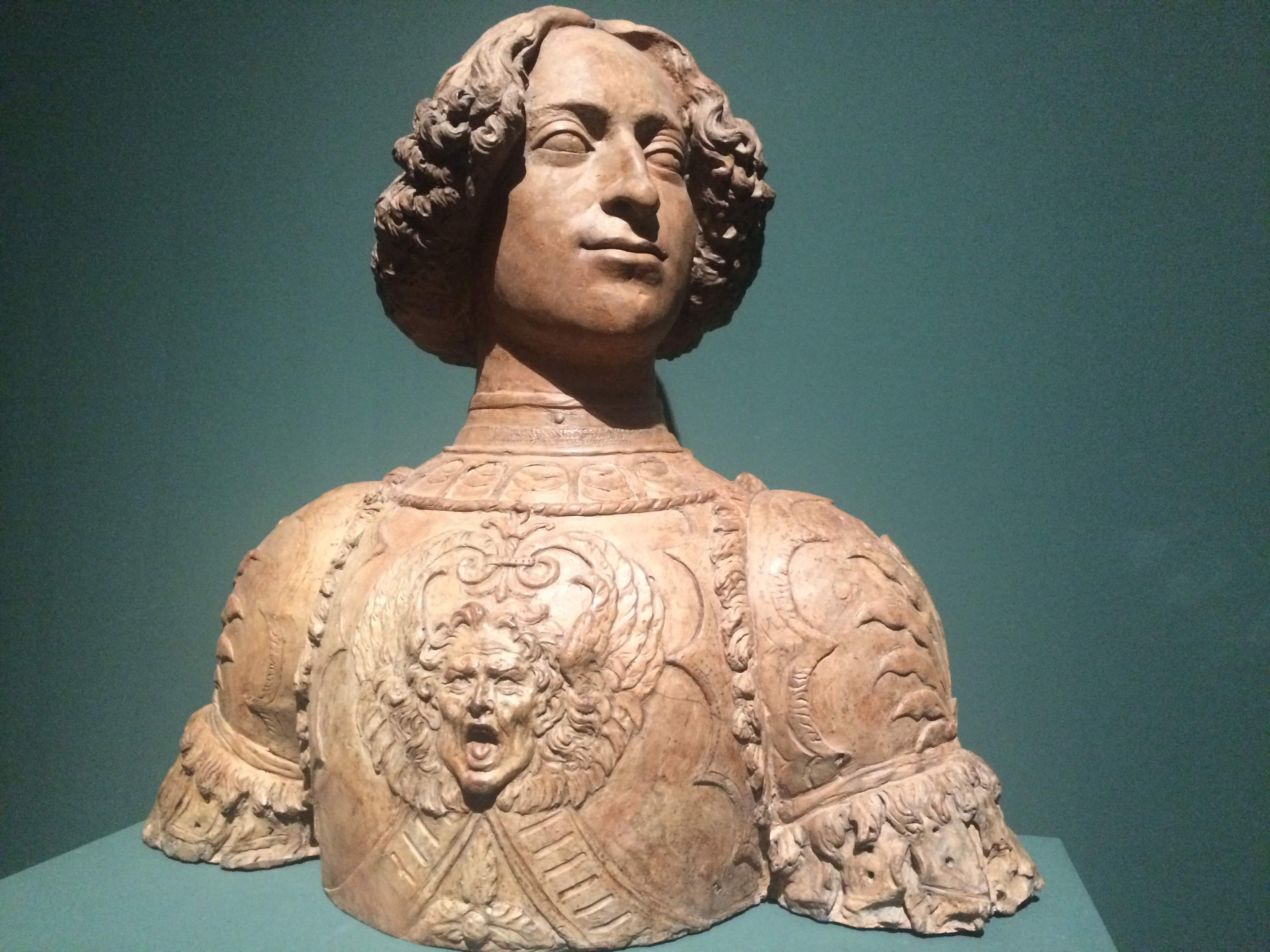 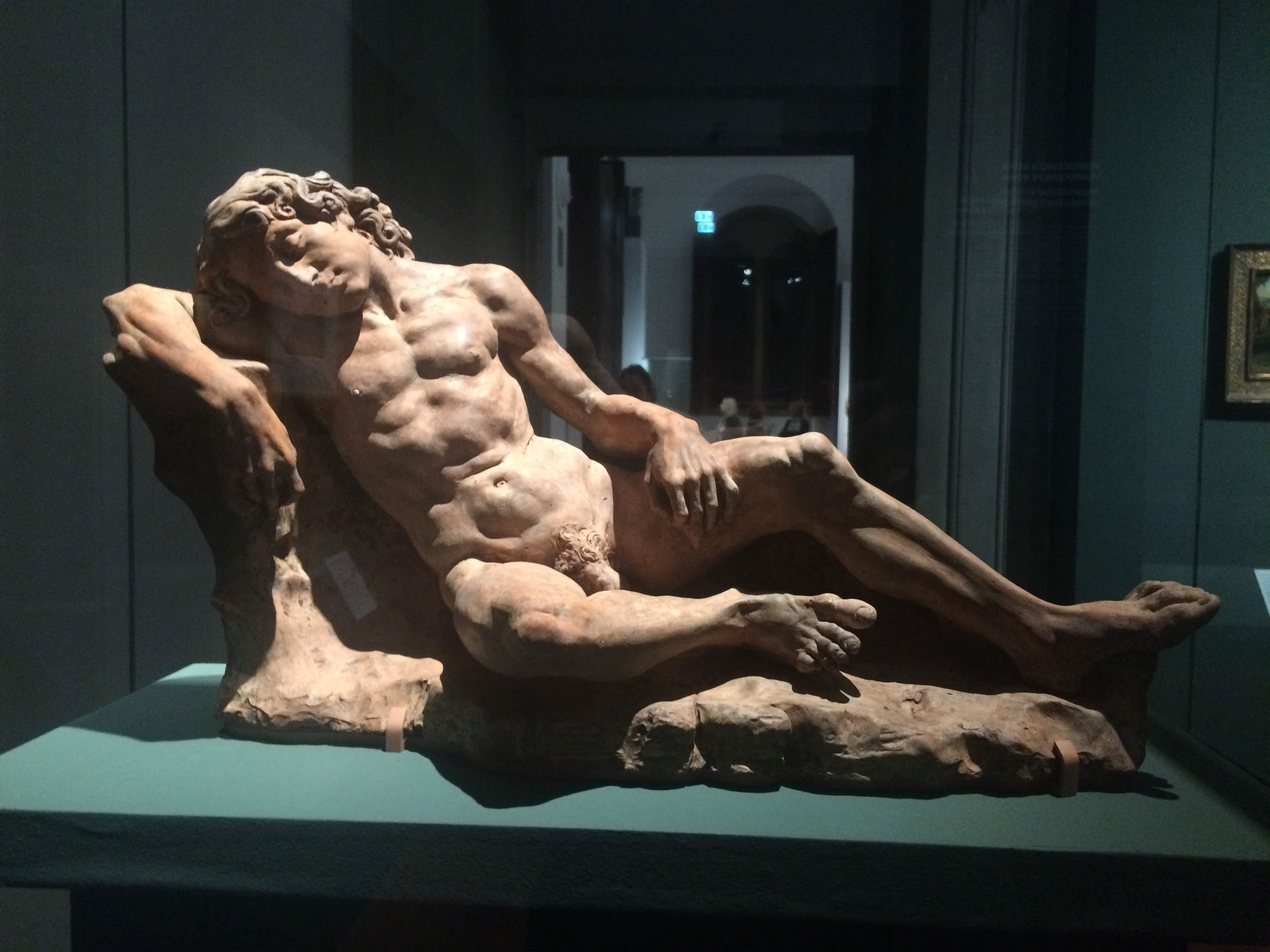 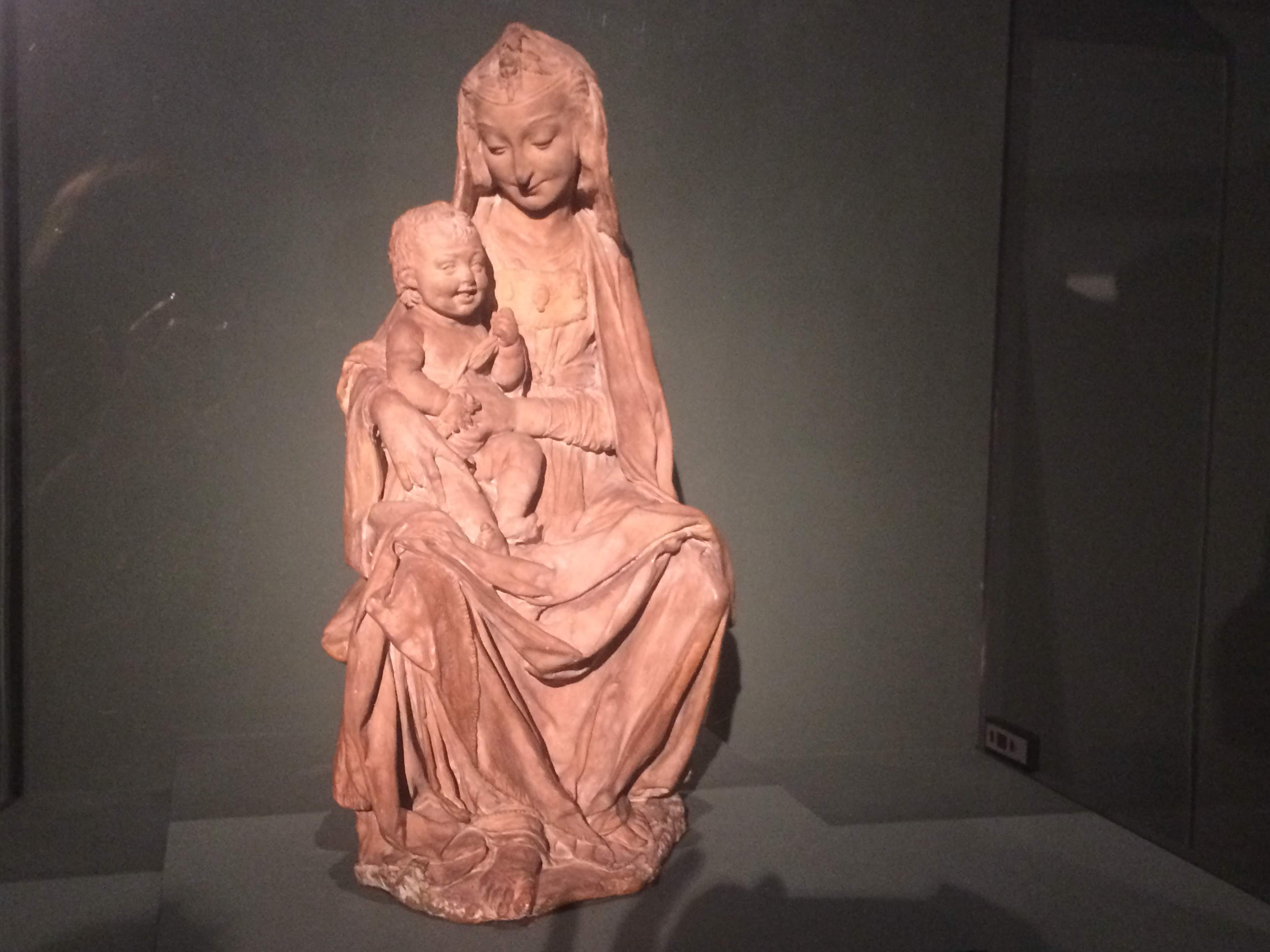 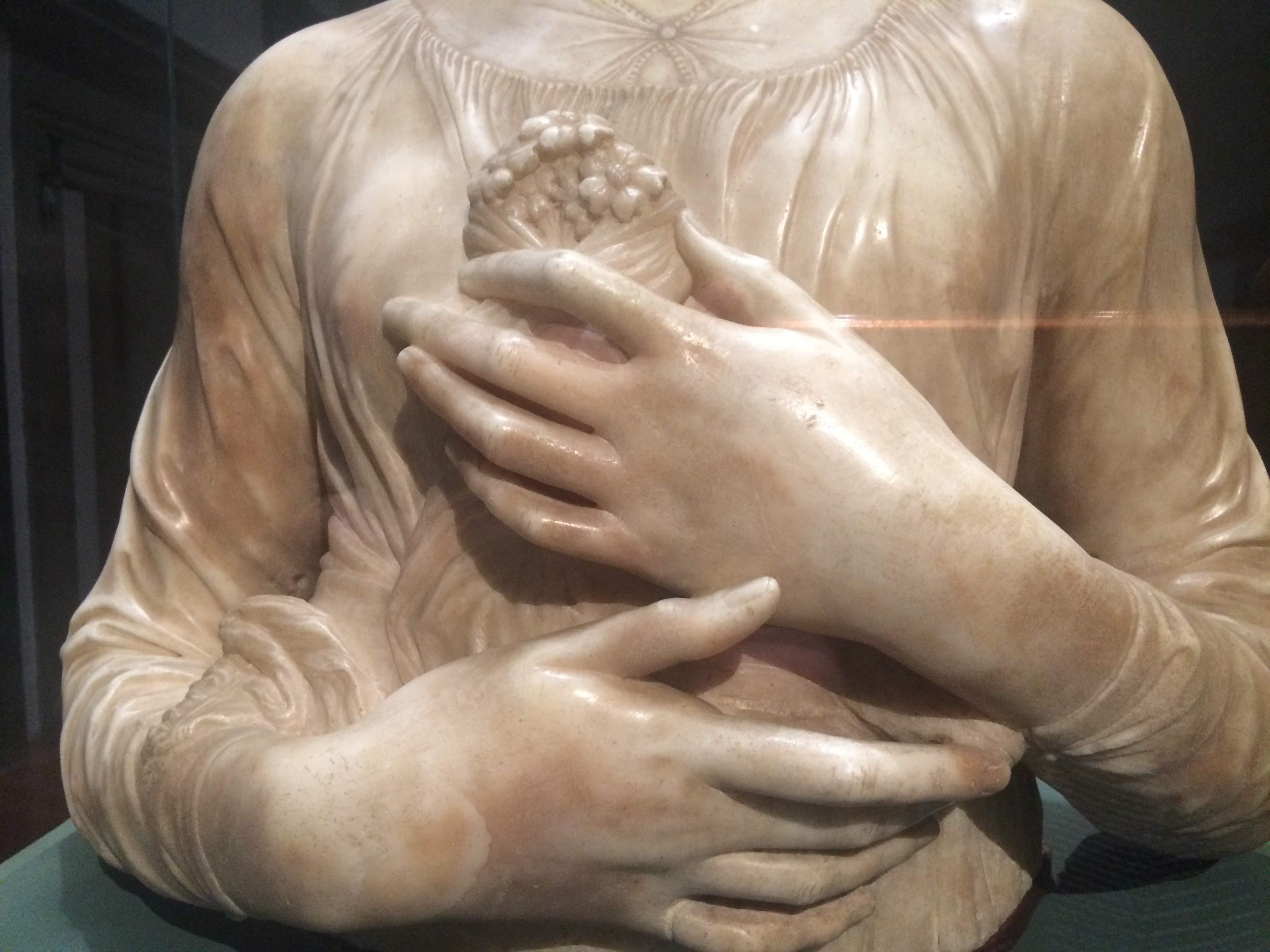 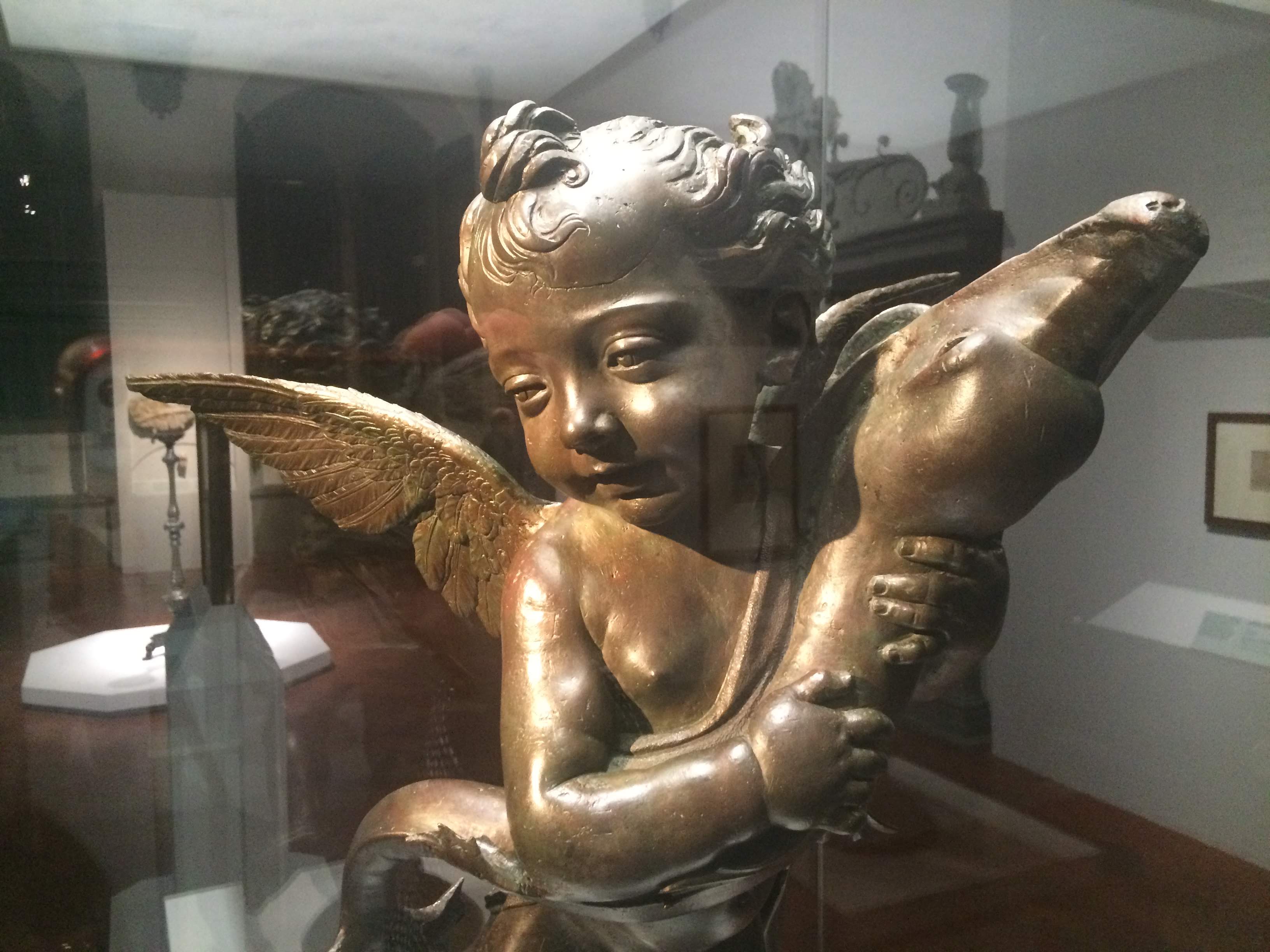